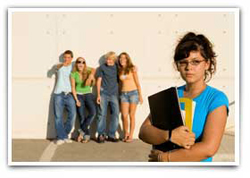 Bullying is when a person or group repeatedly tries to harm someone who is weaker or who they think is weaker. Sometimes it involves direct attacks such as hitting, name calling, teasing or taunting. Sometimes it is indirect, such as spreading rumors or trying to make others reject someone.

Often people dismiss bullying among kids as a normal part of growing up. But bullying is harmful. It can lead children and teenagers to feel tense and afraid. It may lead them to avoid school. In severe cases, teens who are bullied may feel they need to take drastic measures or react violently. Others even consider suicide. For some, the effects of bullying last a lifetime.

School Bullying affects us all The overall outlook of the long term effects of bullying upon society is grim:

In schools that have an anti-bullying program, bullying is reduced by 50%.

The Stop Bullying Now Foundation was founded to address the epidemic of bullying that exists in our schools today.

Our main objective is to raise funds to assist all 67 school districts in Florida as well as School Districts around the country in creating a sustainable and powerful anti-bullying program. 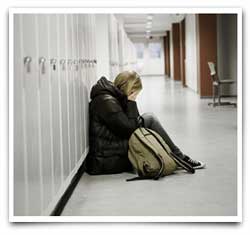 Donate to Our Foundation!